China Factories Stand Ready to Go, But Where Are the Workers? 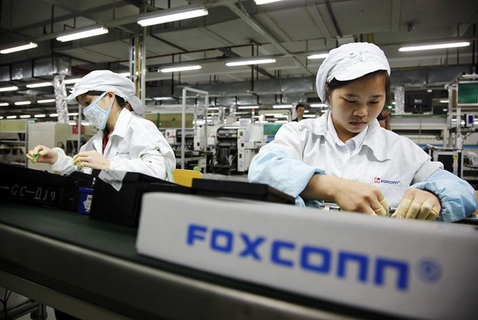 All applicants to Foxconn jobs in the central city of Zhengzhou need to verify their location over the last 15 days using data from their smartphones. Photo: VCG

As Chinese manufacturers get back to work this week after an extended Lunar New Year holiday thanks to the Covid-19 outbreak, many are finding their biggest challenge is simply filling their factory floors.

Millions of Chinese residing in the country’s major cities returned to their smaller hometowns late last month for traditional family reunions during the year’s most important holiday. But many have had trouble returning to the cities where they work since then due to travel restrictions. And once back, many face mandatory quarantines and other measures aimed at limiting the virus’s spread.

Global electronics giant Foxconn, which employs an army of more than 400,000 on the Chinese mainland, is struggling to fill its factory floors after officially resuming operations on Monday. A broader survey of American companies in China released the same day showed that more than three-quarters also have insufficient staff to run a full production line.

Among 109 of its members surveyed last week between Feb. 11 and 14, some 69% involved in manufacturing said their operations were up and running by Feb. 14, according to the American Chamber of Commerce in Shanghai. Another 22% said they expected to be up and running by this week.

But despite reopening, resuming full production remained difficult due to staffing issues. Of the companies surveyed, only 21.8% said they had enough staff to run a full production line. Respondents cited Covid-19 related travel restrictions and a mandatory 14-day quarantine period for returning workers as the two biggest factors keeping their shops understaffed. When asked what their biggest challenge would be over the next two to four weeks, 41% cited lack of staff as their top concern, ahead of logistics, which was the next top concern for 30% of respondents.

Many of those issues were on display at Foxconn, maker of Apple’s iPhones, which is rolling out a multi-pronged approach in its bid to control the virus while restaffing its two largest Chinese mainland campuses in the central city of Zhengzhou and the southern city of Shenzhen. During the SARS outbreak 17 years ago, which peaked after the Lunar New Year holiday, Foxconn became famous for putting its massive campuses with everything from production lines to living quarters into a state of lockdown, with most people prohibited from entering or leaving.

Foxconn formally resumed small-scale operations at both its Zhengzhou and Shenzhen campuses on Monday, a week later than previous plans, with an aim to ramp back up to full production by March. The Zhengzhou campus was offering bonuses of 3,000 yuan ($430) to some employees who could begin work in the next few weeks, according to job ads on various company sites.

But conditions laid out in the company’s hiring policy for Zhengzhou, located in Henan province, showed the tricky lay of the land as Foxconn seeks to fill its factory floors while keeping the virus out.

The company isn’t hiring people from a number of Henan cities that have recorded 40 or more cases of Covid-19 infections, nor is it hiring yet from outside the province, two people close to Foxconn’s Zhengzhou operations told Caixin. All applicants to jobs there need to verify their location over the last 15 days using data from their smartphone location-tracking capabilities. Hires from the city of Zhengzhou can begin working immediately, while workers from other parts of the province will have to be quarantined for seven days, the sources said.

A person at Foxconn’s Shenzhen operation told Caixin that workers who stayed in Shenzhen over the holiday period were allowed to resume work immediately, and that a production line making tablet computers had already completely resumed operation.