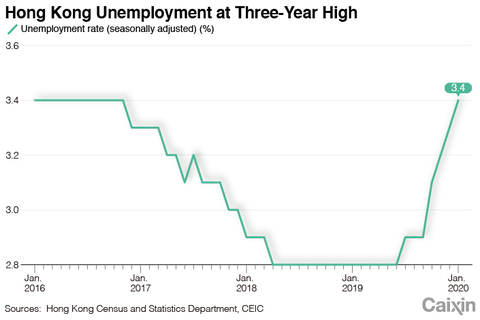 Hong Kong’s unemployment rate surged to a three-year high as its services sector sputters under months of civil unrest and fallout from the Covid-19 outbreak, with economists now forecasting the city could post an unprecedented second straight year of economic contraction.

The Asian financial center’s jobless rate rose to 3.4% for the period of November 2019 to January this year, the highest since 2017, according to local government data released on Tuesday. As of January, Hong Kong’s unemployment rate has increased for reporting periods over the last five months.

“The recent coronavirus infection has seriously disrupted many economic activities, especially tourist-related industries,” said Law Chi-kwong, secretary for Hong Kong’s Labour and Welfare Bureau. Industries including retail, catering and lodging had employed one-sixth of local residents as of September 2019. Those sectors posted a combined unemployment rate of 5.2% during the past three months, or well above the overall city figure. The construction industry jobless rate was an even higher 5.7% — a six-year high, Law noted.

Hong Kong’s woes began in June when mass demonstrations — some violent — began over an unpopular piece of legislation. The protests have continued to the present, causing numbers to plunge for the important tourism sector as visitors stayed away. More recently, the city has taken another beating from the Covid-19 outbreak on the Chinese mainland, which has spread to Hong Kong and is hurting consumption by local residents as many go out less to avoid getting sick.

Read more
In Depth: China’s Services Sector Pulls Out All the Stops to Survive the Coronavirus

The city closed several of its border crossings with the Chinese mainland in early February to lower the risk of more infections from an epidemic that has sickened tens of thousands and killed over 2,000. The mainland also stopped issuing passes for its residents to travel to Hong Kong and Macao, dealing a further blow to shopping traffic to the city.

Some major local retailers have announced downsizing measures in response to dwindling demand. Local restaurant operator LH Group Ltd. temporarily shut down two hotpot restaurants on Feb. 13 to assess market conditions, and pledged to halve wages for its executive directors and officers starting next month. Sa Sa International Holdings Ltd., a major cosmetics chain, has also temporarily closed 20 stores in Hong Kong and Macau, and plans to lay off up to 3% of local staff.

Revenue for Hong Kong’s catering industry dropped by 5.9% last year, led by 11.7% and 14.3% declines in the third and fourth quarters, respectively, as the protests gained momentum.

Amid the new round of virus-related turmoil, economists have forecast the city’s economy could contract by more than 1% this year, marking a first-ever second year of negative growth after a 1.2% decline in 2019. That would mark a greater drop in Hong Kong’s real economy from the virus than from the 2003 SARS epidemic, Hong Kong Financial Secretary Chan Mo-po wrote on his Caixin blog. “The tsunami-like influence on industries could lead to a further plunge in employment,” he said.

The city’s government said on Tuesday it had budgeted HK$28 billion ($3.6 billion) to help industries hit by the epidemic. That includes one-time HK$80,000 subsidies for licensed travel agencies and retailers, and HK$80,000 or HK$200,000 for licensed restaurants.

Bloomberg contributed to this report.